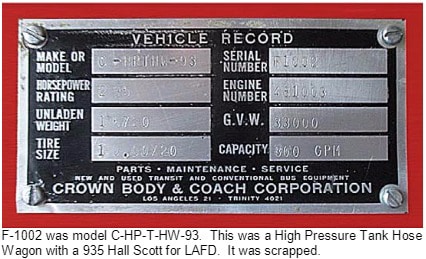 How to Decipher Crown Firecoach Model Information By Mike Britt, CFE President and Historian All vehicles manufactured by the Firecoach Division of Crown Coach had a builder’s plate which Crown called the “Vehicle Record Plate” located in the driver’s compartment of the vehicle near the accelerator pedal. The information on this plate is useful in […]

By Thomas Parsons, and from “the Roto-Ray” the newsletter of the Mile High Hook And Ladder Chapter. I have a buddy who bought an old fire apparatus. It makes me think of how many times my well intended procedures of planning were kiboshed while associated with the various organizations in my professional past. No one […]

By Mike Britt, CFE President and Historian The serial number for a Crown Firecoach is often referred to as the “F-number” because the 4-digit serial number Crown used was preceded by the letter “F” (for Firecoach). The “F-number” was the only Vehicle Identification Number (VIN) for all Crown Fire coaches until January 1 of 1981, […] 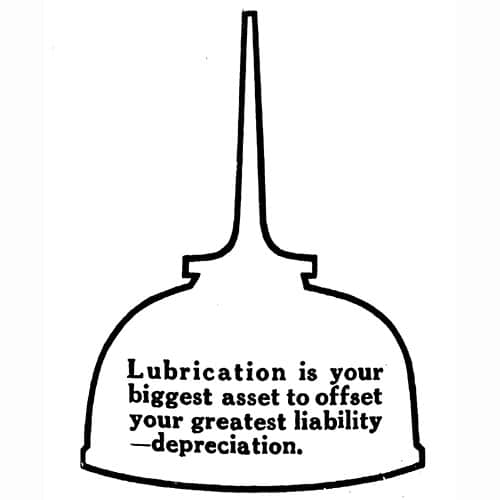 The real title of this article was “When in Doubt . . . Don’t Mix Bearing Lubricants.” The original three-page article was written by John Rumierz and was printed in the August, 2000, issue of Plant Engineering. John listed three key concepts; I am going to cover two or them: • Do not relubricate bearings […]

“STOP! Think Before you Put Your Car (or Fire Apparatus) Under Plastic”

The following was in the January, 2003, issue of Skinned Knuckles. How you store a vehicle is critical to its well-being. Storage under plastic sheeting is a particularly bad idea. The same feature of plastic that protects things from falling rain and dust traps moisture that rises from the ground. Unless a vehicle is parked […]