The SPAAMFAA Organization
Owning and Restoring a Fire Engine
Fire Trucks (and Engines) in General
frequently asked questions about:

Answer: In 1958 Richard Horstmann and a group of friends purchased an antique fire engine, and formed a not-for-profit corporation — the “Society for the Preservation and Appreciation of Antique Motor Fire Apparatus in America.” The organization’s name was conceived the year before, as part of a tongue-in-cheek article drafted for a local newspaper. Horstmann thought the official and grandiose name would give credibility to his explanation of why several young college students spent a spring afternoon peering through fire station doors at ancient apparatus in Syracuse and a dozen other central New York communities.

In recent years, when asked to define “SPAAMFAA” some members have replied (tongue-in-cheek) — that it is the “Society to Prevent Cruelty to Antique Fire Engines.”

Question: Am I required to own a firetruck to be a member?

Answer: No, you just have to share our passion for them.

Question: How old (or young) can I be to join?

Answer: Membership is open to anyone. SPAAMFAA offers a “Junior Membership” for those under the age of 18.

Question: What's the difference between joining a local chapter, and the national organization?

Answer: The SPAAMFAA organization consists of both individual local chapters and as as overall national (international) organization.

Members may choose to join a local chapter, several different local chapters, and/or the National organization as a whole. Each option provides different benefits.

For more specifics about these benefits, see the page:
Join SPAAMFAA National

Question: I live in (middle-of-nowhere) what should I do?

Answer:  Ring a bell, blow the siren, gather some friends, and start a local chapter!  (See the next question below for more specifics)

Question: How can I start a local chapter? 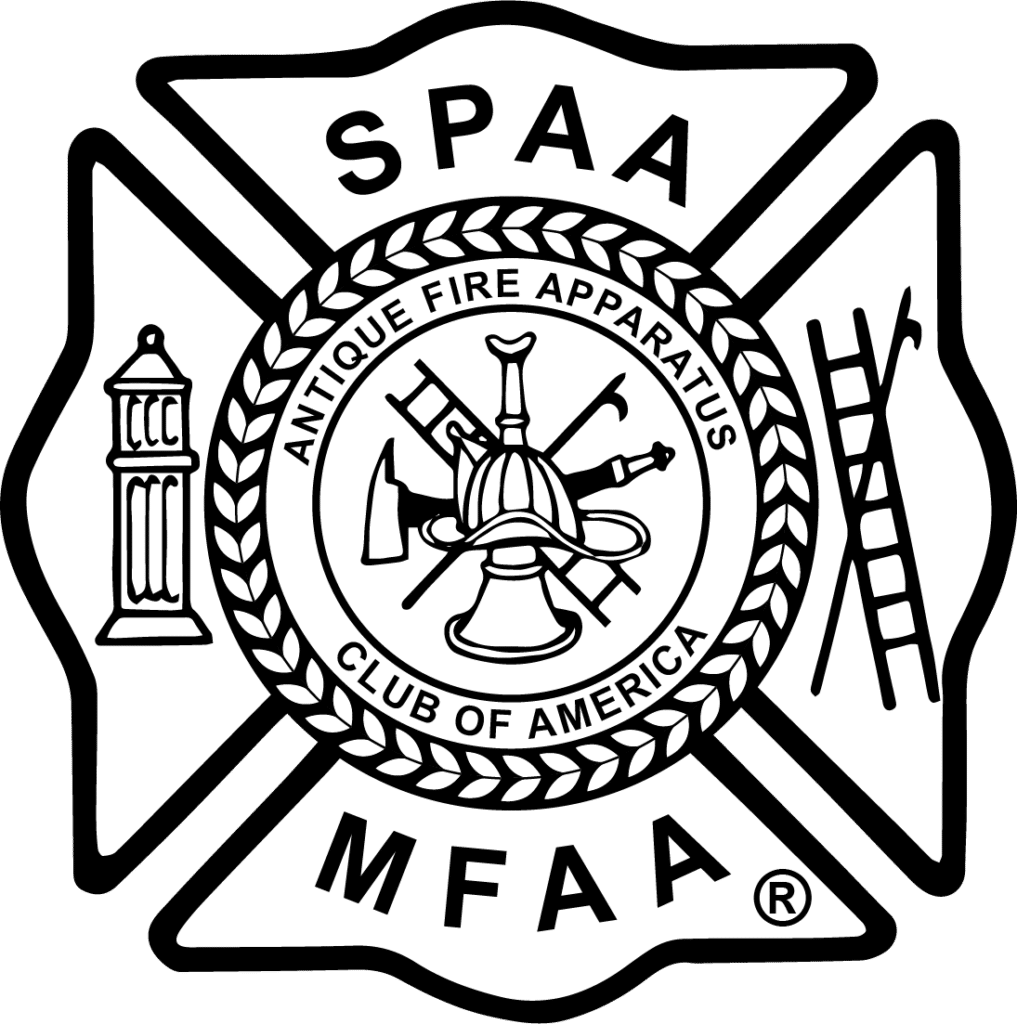 Owning and Restoring a Fire Engine

Question: Am I allowed to own a fire truck?

Answer: Yes. There are often some vehicle age restrictions, but as long as your truck is 30 years or older you can title, own, register and drive it as an antique fire truck.

Question: Do I need a special license (CDL) or permit to drive an antique fire truck?

Answer: No. Your normal drivers license (class E) is all that is required.

Answer: Only when they are new. Antique fire trucks are among the most reasonably priced antique vehicles on the market – essentially because there is little demand for them. You can expect to pay between $1,500 and $3,500 for all but the most rare apparatus. Before you buy contact a member of our organization for guidance on the purchase of an antique fire truck. Sellers often believe an antique fire truck is worth far more than actual fair market value, and so one of biggest mistakes newcomers make is to over pay.

Question: Isn’t the insurance for these trucks outrageously high?

Answer: Not at all. Expect to pay less than $200 a year per truck. Insurance can be easily obtained from a number of companies that specialize in antique vehicle insurance.

Question: Are there any insurance related restrictions?

Answer: Yes, these will vary depending on the agency, but most state the insured owner must be 25 years or older, the truck cannot be driven more than 2,500 miles per year and must be stored in indoor, secured storage.

Question: Are there any hidden costs?

Answer: The most often overlooked cost is for indoor storage which can run anywhere from $110 – $250 per month. Mechanical repair work can also prove very costly. It is far more economical to purchase an antique fire truck that is in excellent operating condition, rather than one that looks all shiny and nice, but needs brake, pump or engine work. A typical brake job on a firetruck can easily exceed $2,000.00.

Question: So what do you do with an antique firetruck?

Answer: Our local chapters participate in wide variety of events such a city and municipal parades, charity fundraisers, educational events, car shows, area fire department open houses, and many other types of events. Often there are more events than there is time to participate in all of them.

Fire Engines, Fire Trucks, and the Hobby in General

Question: Why are fire engines red?

Answer: Because they have four wheels, and carry three firefighters, and four times three makes makes twelve. There are twelve inches in a foot, and one foot is a ruler, and Queen Elizabeth was a ruler. Queen Elizabeth was also a ship, and the ship sailed the seas, and there were fish in the seas, and fish have fins. The Finns fought the Russians, and the Russians are red, and fire trucks are always “Russhin” around, so that’s why fire trucks are red!”

Blue, green, yellow, pink, purple, black, white, and red (all-over!) — fire apparatus can (and has been) be painted every color of the rainbow. In the nineteenth century the concept of firefighting as a civic duty and community responsibility was born. Great pride was taken in being a firefighter and often rivalries developed between neighboring companies. Fire apparatus became objects of pride and admiration, firefighters or communities often chose unique colors and fancy embellishments to distinguish themselves from their neighbors. They also hired noted painters and folk artisans, to embellish their apparatus (and their own image).

Question: What's the difference between a fire TRUCK and a fire ENGINE?

Answer: Often the public use the terms interchangeably, but in the fire service and fire apparatus community, there is a distinction. Fire department vehicles are generically referred to as “fire apparatus.” Different pieces of apparatus perform different functions — such as squirt and carrying water, hose, ladders, firefighters, other specialized equipment.

In most basic terms, fire engines, squirt water, fire trucks don’t. Engines (sometimes called fire pumpers) have a water-pump (water-pumping engine), and typically they carry hose and a water tank. Trucks, (hook-and-ladder, or simply ladder trucks) generally carry various ladder and specialized tools. Of course there are many variations and hybrids and exceptions.

Question: I'm looking for information on a fire engine from (somewhere) can you help me?

Answer: Unfortunately, no. There have been hundreds of fire engine manufactures over the years, and while we have delivery records from some, even those are incomplete and difficult at times to search. We recommend your first step be posting a query on our Facebook Group.  With more than 2,000 members, they are a vast treasure-trove of historical knowledge and information. You might also search the Apparatus Manufacturers Build Lists and see what information they might contain. For some manufacturersyou can contact the SPAAMFAA Archives and begin a research query.

Answer: According to the dictionary, “muster” means, “to assemble or gather.” In simple terms, a firemen’s or fire engine muster, is a gathering of firefighters or fire engines.

Firefighters have been gathering to demonstrate, (and at times compete), for more than one hundred and fifty years. Fire engines used in the nineteenth century, required many people to operate. Great pride was taken in the abilities of the engine (and the crew) to perform at a fire. Often rivalries between fire companies developed and competitions were held to prove their water-pumping prowess.

The first recorded fireman’s muster was held in 1849 in Bath, Maine where five fire engines vied to pump water the furthest. Firemen’s musters were soon held throughout New England. An average of nineteen musters a year — with an average of ten engines competing at each — were held in the 1850s. The muster phenomenon also spread west outside of New England, with firemen’s tournaments being held in California, Illinois, Indiana, Louisiana, Michigan, New York, New Jersey, Ohio, Pennsylvania, South Carolina, Tennessee, Virginia, Wisconsin, and Canada.

Today, hand-engine competitions are still being held in New England, and California, while many other local and state associations sponsor various fire engine “musters” throughout the North America. Many local chapters of SPAAMFAA organize and participate in fire engine “musters.” [see calendar] and the summer SPAAMFAA National Muster typically attracts over 100 antique fire engines from far-and-wide.